An interview with Shaun Hayes 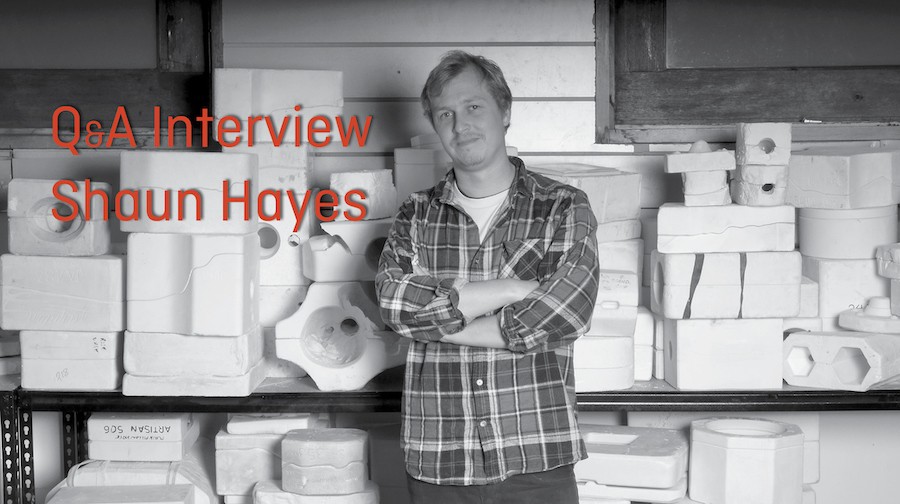 In his latest exhibition ‘Trashed’, Shaun Hayes investigates the material conversations of waste. How has disposability translated into the materiality of the objects around us? Interested in the feelings and memory these throwaway objects evoke, Hayes comically uses trash to build vessels of Western cultural heritage. Our garbage becoming a biographic assemblage of certain value systems. In this latest interview, Hayes gives us insight into his art making and conceptual process.

de Carteret: When did you first get into ceramics? What was the moment like when you connected with the process?

Hayes: My first experience making ceramics was when I was fairly young, my grandma used to take pottery classes in Perth and she took my brother and I to choose a piece of bisqueware we could decorate and get fired during a visit. I got some dragon hatching out of an egg and thought it was great. Before that it was mud pies from the garden, which I once stored in a cupboard in the garage, to find days later dried out and cracked.

de Carteret: Can you talk about your interest in value systems and objects? How did it start? What’s your earliest memory?

Hayes: I have always had a fascination with objects from a young age, I would always play with objects like cardboard boxes and bottles for hours, making up games. I feel like all objects are all quite interesting really, they are a piece of design history in a way certain shapes and styles of especially consumerist products are indicative of a time and style in which they were produced. Often overlook as one-use objects they both serve a purpose as well as hold a particular design aesthetic similar to that of functional ceramic wares.

“I think that there is a lot that goes into every object that is made even those that are mass produced, whole teams of people are working on every aspect of disposable items and are mostly used to serve a purpose and not thought of as anything more by the consumer.”

de Carteret: your work is quite critical of the life cycles of certain disposable objects. What do you think this says about the consumerist culture we live in?

Hayes: I think that there is a lot that goes into every object that is made even those that are mass produced, whole teams of people are working on every aspect of disposable items and are mostly used to serve a purpose and not thought of as anything more by the consumer. I find the details in these objects to be quite interesting and the way that functionality and the appealing aesthetic merge to create the ultimate object quite interesting. These objects are so familiar to everyone even globally that in some ways I feel like we are all bound together through trash. No matter the culture the differences in status or socio economics, one thing we all have in common is the consumption and use of plastic disposable waste. 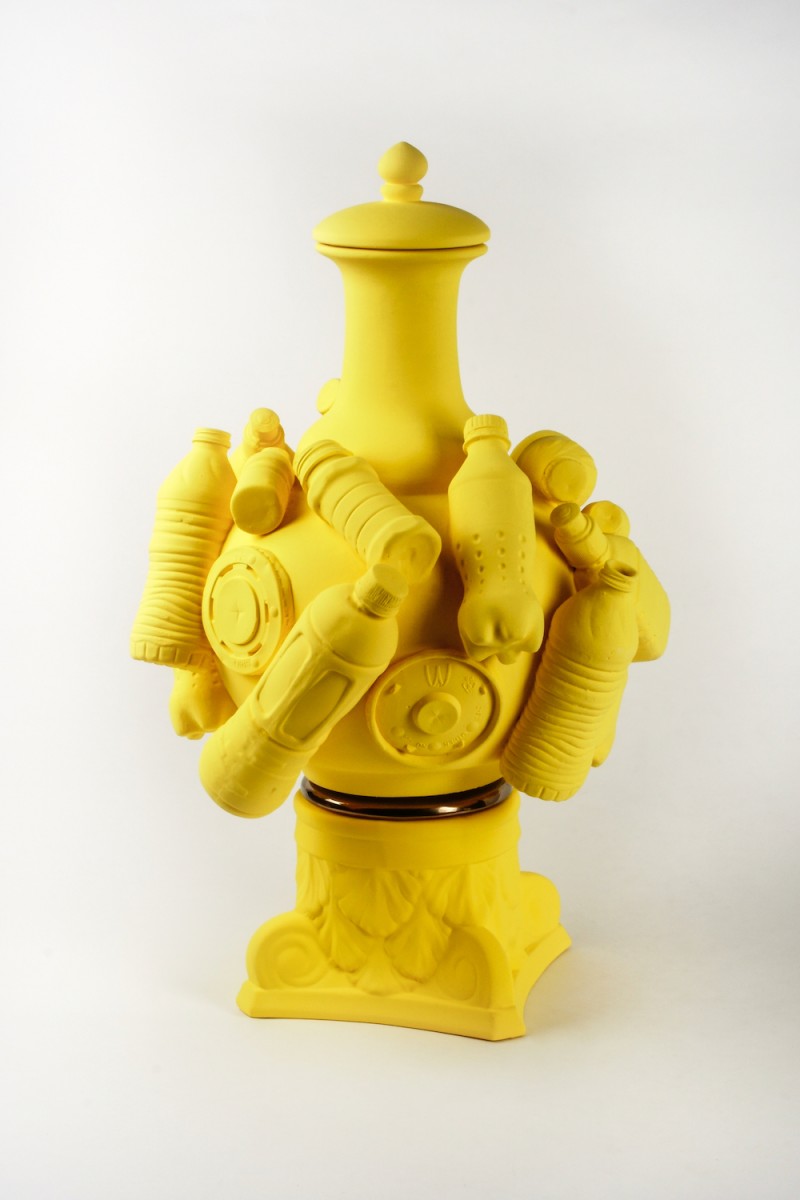 de Carteret: Is there a contradiction between these life cycles (particularly plastic) and the life cycle of ceramics?

Hayes: I feel like in more ways than others there more similarities than differences between plastics and ceramics. Both are used in to serve a function and disposed of after they have served their function, whether it be once use in terms of plastics or after a ceramic cup has lost its handle or a plate is chipped, or simply no longer in trend. Now obviously plastic wears especially those for single use purposes are disposed of a lot quicker than ceramics, which is able to be used a multitude of times, however the end result is the same. After their intended use, majority of the time, these objects are discarded and end up in land fill and take an inconceivable amount of time to break down, if they ever do.


I think both ceramics and plastics are both major milestones in the foundations of human society. Ceramics being one of the earliest ways in which human beings were able to forever change things in the environment around them forever, to create literal stone that would never break down whilst also holding within its moments in history and time capturing so much of humanities developments within the vessels, i.e decoration and construction/firing techniques. Much of humanities earliest records are captured in the archaeological history of ceramics. The creation of plastics likewise has enabled human society to grow to what it is today through the formation of the material, and its multitude of uses today.

de Carteret: Material sustainability is a big theme in your practice. How do you engage with this on a day today? (in and out of your artistic practice).

Hayes: To be honest not really at all, I think like many of us, I try to be conscious of the decisions I make regarding material sustainability, but I find myself constantly being wasteful time and time again. A lot of time I find it is out of my hands. i.e buying food from the grocery store already is pre-packaged in plastics. Or simply the ease of use, like the ease of buying a coffee on the go as opposed to taking time out of my day to make a coffee. In my artistic practice I am also wasteful; I am constantly collecting different bottles or plastic objects I like but may not need to be cast as elements within my work. The way I work on each piece is also slow. So, I find wrapping the works in plastic bin bags helps to keep the clay at a state which allows me to still be able to work on them over time.

de Carteret: Will we ever know or get a sense of the scale and impact of the consumerist culture we live in?

“I think that we are so detached from the impact we have on the environment, for example, what throwing away a plastic bottle can mean […] we have created structures or systems to erase true meaning that the everyday objects have […] so we don’t feel anything when we throw away plastic bottles.”

de Carteret: What is the role of the artist/ceramicist in all of this?

Hayes: I agree that we are so removed and, in a way, designed to be removed from our own individual impact to protect the interests of a select few. I think like many aspects of today’s culture things like environment are most of the time overlooked and compromised in the name of human “progress”. It worries me a lot the way humanity is going regarding this, I feel like a lot of people do, in that it is hopeless and there is not really anything people can do at this point to turn much around. I myself feel it is important to at least record this point in which we are at, like ceramic vessels of the past that told us so much about the history of the times, my vessels relate to our own modern history.

de Carteret: What is it about the vitrification of memory/ objects/ things, turning something ephemeral into a literal piece of stone, what does this capacity as an artist say about human desire?

Hayes: I like to play with the idea of what it means to be ephemeral and long lasting. I think people associate a plastic bottle as something you use quick and it goes away, whereas a ceramic sculpture or vase is something revered, displayed and seen to be enduring. However, both last forever in the environment and though plastics degrade to a point unrecognisable they take thousands of years before completely breaking down, if ever. I am hoping by combining the two to shed some light on the similarities between each material. I suppose art for me is about capturing these moments in time and allowing for them to be reflected on by others. 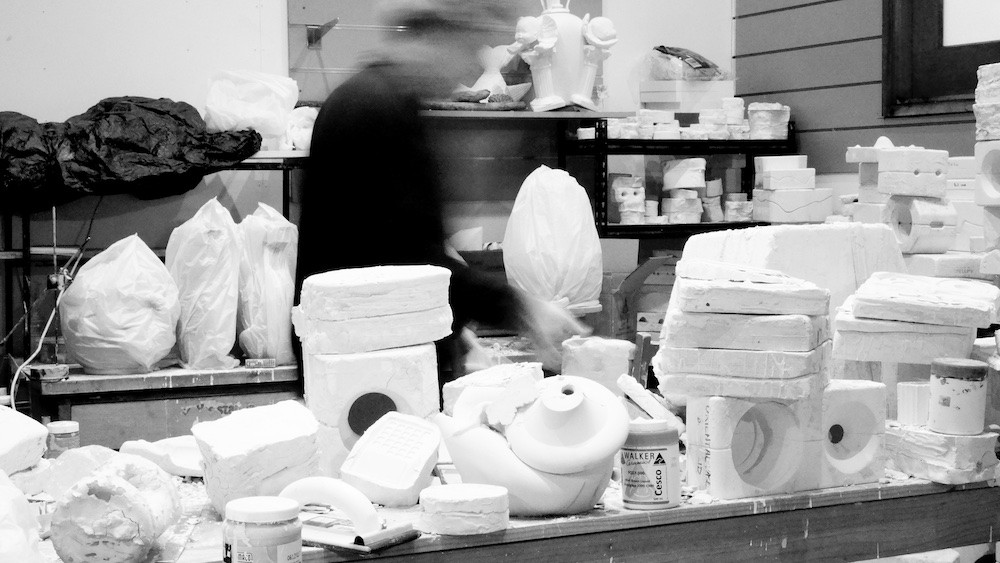 de Carteret: Slip casting technique is employed today for the globalised mass production of ceramics. The cheap tableware that we buy from Kmart or Coles are often slip cast. In this technique the makers hand, that is so obvious in wheel thrown and hand building technique, is removed. Does slip casting relate to your themes of consumerism and sustainability?

Hayes: Yes, I think using slip casting techniques allows me to relate to the idea of mass produced and globalised society. While at the same using the procedure and tipping it on its head, using the same techniques that create vast amounts of waste and volumes of wares and using them to make one-of-a-kind sculptures. This allows me to replicate objects identically whilst still enabling my work to be recognised and distinguished by my own style. The idea that using slip cast techniques means there is no mark of the maker to me does not ring true. Just as you can tell the difference between slip cast Wedgwood ceramics versus Kmart ceramics, my work is recognisable through the objects used, style and combination of elements involved.

“I have always been fascinated with ancient cultures, and the art/ceramics associated with these cultures. I have always found it captivating that ceramics is able to talk so much about past societies and remain intact of thousands and thousands of years for future generations to discover, I have always been aware of this within my practice.”

de Carteret: Can you talk a bit about the vase forms you will be using? What are you inspired by? What are their importance?

Hayes: I have always been fascinated with ancient cultures, and the art/ceramics associated with these cultures. I have always found it captivating that ceramics is able to talk so much about past societies and remain intact of thousands and thousands of years for future generations to discover, I have always been aware of this within my practice. Drawing on this idea I try to combine the ancient history of ceramics with the modern aspects of society being like a time machine giving future generations a glimpse into our modern world. Using these forms both allows for my admiration of these objects whilst instilling in my work the notion of time place and history.