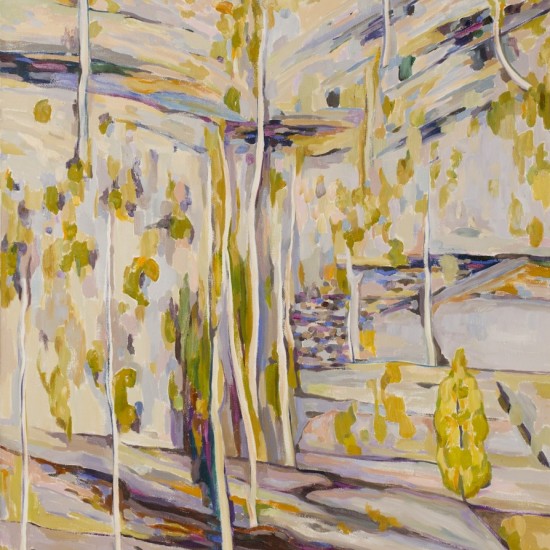 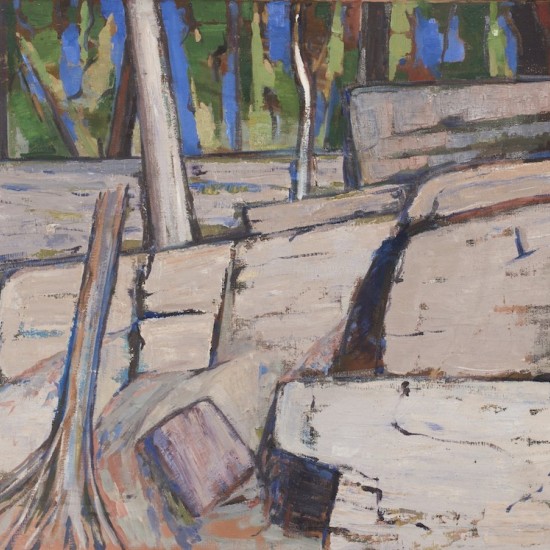 Roadside - Going up the Gorge at Wedderburn, 1980s
AVAILABLE 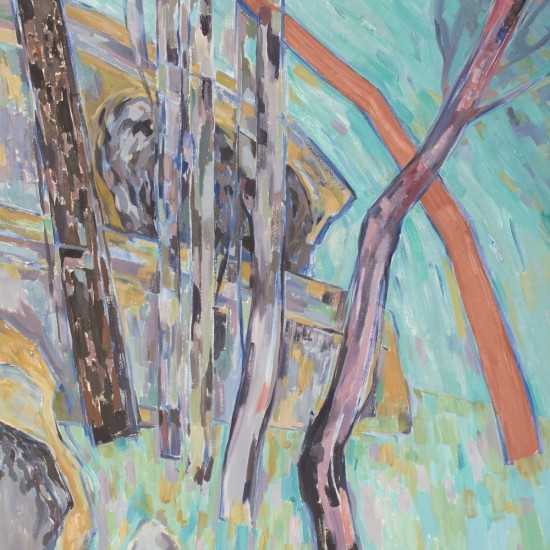 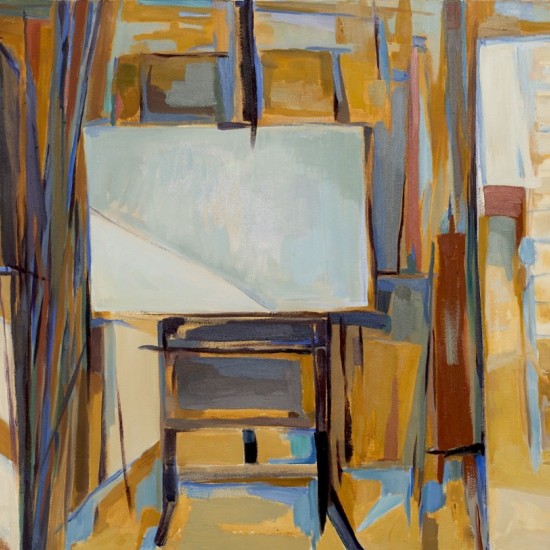 How Can I Paint?, ND
AVAILABLE 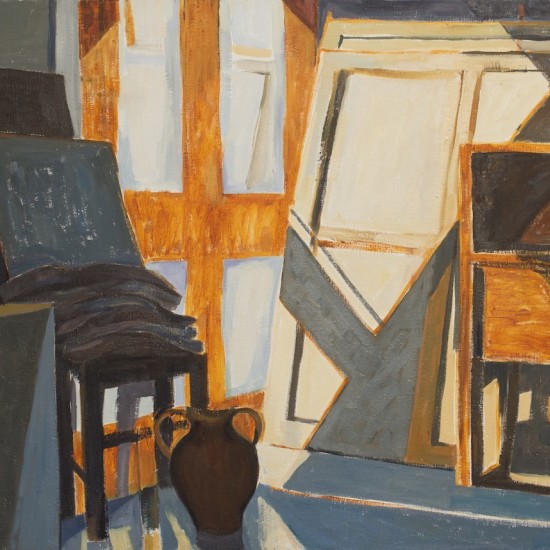 Studio with Strong Light, circa 1997
AVAILABLE 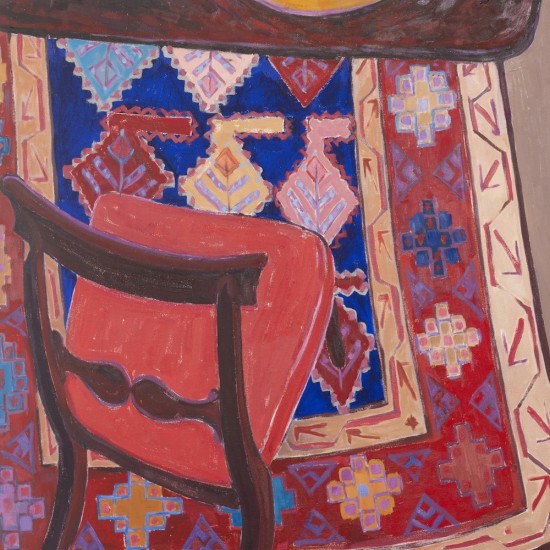 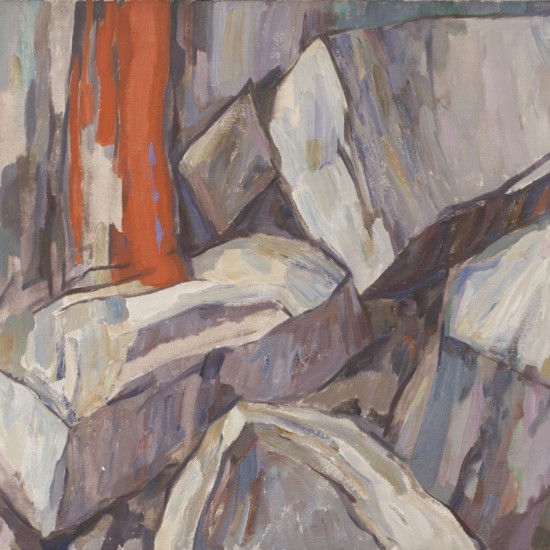 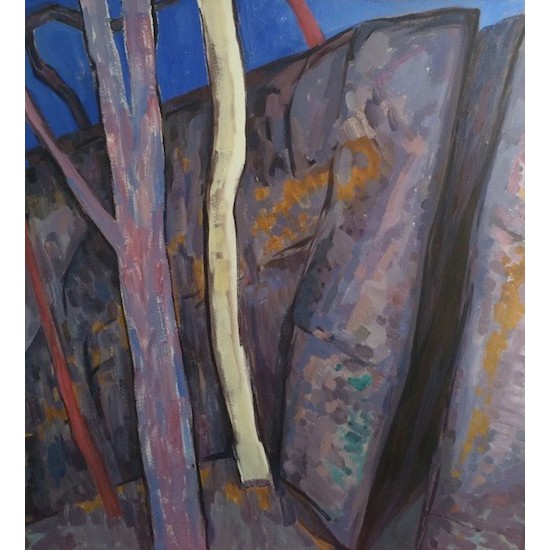 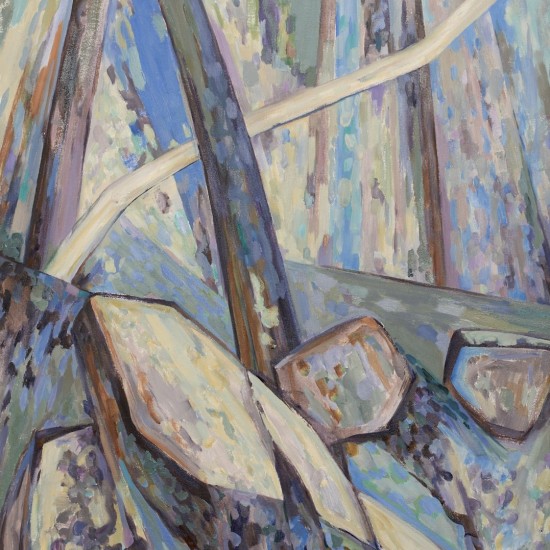 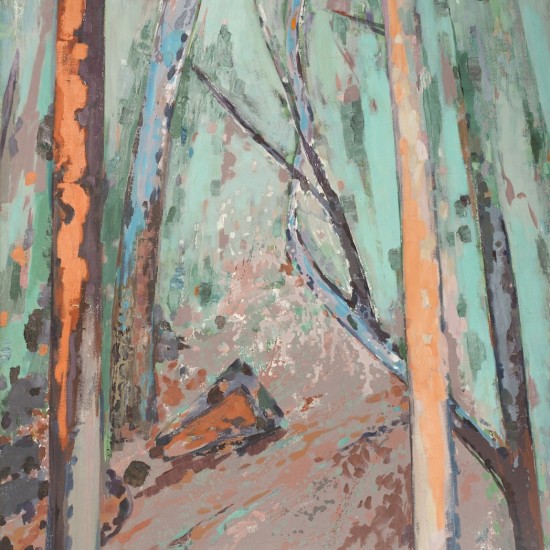 Variation round a triangle No 1, ND
AVAILABLE 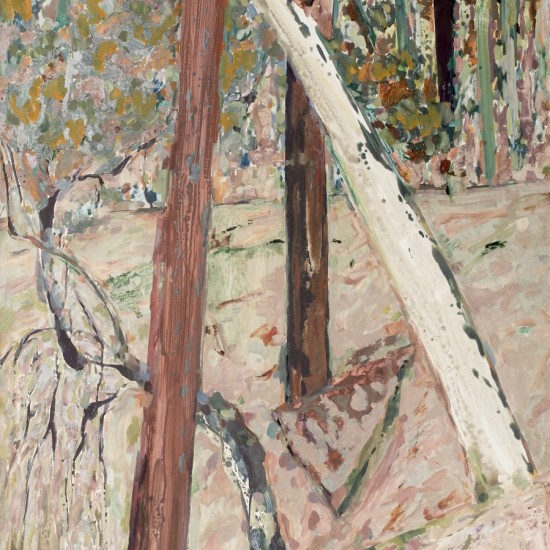 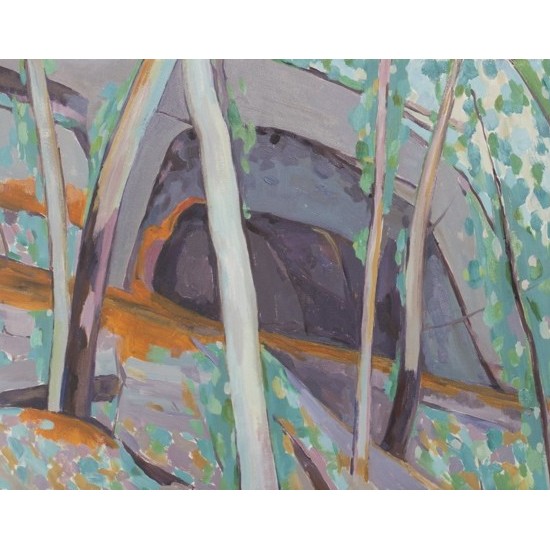 This exhibition has provided an opportunity to reflect upon the life of my father; a talented artist and teacher, showcasing a range of landscapes and still lives made during his significant career spanning 60 years of professional practice. These works reflect not only the technical talent of a skilled colourist with a keen eye for composition, but the life of a traveller and a teacher, an appreciator and a collector.

My father, James Cathcart Barker, was born on the kitchen table of the family home in Sydney, Australia, on the 17th July 1931, in the midst of the great depression. Throughout his childhood, James was afflicted with a severe case of asthma, causing him to spend long periods in hospital, missing school sometimes for a term at a time, in circumstances where he was not expected to live beyond teenage years. His strength and determination to beat his illness endured throughout his long life. During the latter years of his higher schooling he worked for Stanley Lipscombe, one of Sydney’s most established and respected art dealers, beginning a lifelong appreciation for the collection of antiquities.

After completing his secondary schooling my father wished to study architecture but his mother insisted the degree would be too arduous due to his health and directed him towards a career in the arts. This experience opened his horizons to an exciting and creative environment where he forged lifelong friendships. In times of reflection, he would always recall these years with great fondness. He was also very proud that I studied architecture and has always been very interested in my practice and the field of architecture.

He began his engagement in the arts studying at the East Sydney Technical College, now known as the National Art School (NAS). Under the guidance of teachers such as Douglas Dundas, Ron Millen, Godfrey Miller, Jean Appleton and Dorothy Thornhill, he was exposed to the work and doctrines of both the European and Sydney Modernists. It was these seminal influences that were to stay with James for the duration of his life. While he had a deep fondness for both Italian and Australian artists, it was the turn of the century French painters that served as his greatest inspiration.

After graduating in 1956 James travelled to Italy in search of promising opportunities for his budding talents as an artist, or as he would later describe it to escape the “banality of Australia” of the 1950’s. Taking advantage of Italy’s rich artistic history, James drew inspiration from the great art revolutionaries spending much time frequenting exhibits and collections. It was in Florence he worked and studied for over a decade, letting a small apartment where he was joined by many of his fellow art students and friends including Australian painter Elisabeth Cummings, who he wed in 1965. A constant stream of visitors and James’ love of engaging in lively conversation over good food and wine led to an abundance of frivolity and fun. During his time in Florence, James taught English as a second language at the British Institute of Florence, the Università Popolare di Firenze and to the occasional private student. Finally in 1966, opening his own studio for the instruction of painting and drawing. He was considered a skilled educator but his passion lay with travelling the continent to view and collect fine art and antiquities. A great appreciator, he spent much of his life visiting collections, travelling great distances to do so. He was not blinded by the restrictions of his own medium but also found great beauty and inspiration in sculpture, architecture and held a great fondness for indian miniatures.

In Florence 1966, the year of the great flood of Arno, I was born. At just 4 months, James and Elisabeth travelled to Berlin over the Alps in a small fiat 500 with me in the back, just after the Berlin Wall had been erected, an environment of great change. Memories of my youth are filled with a constant flow of people coming to visit and long dinner parties with much laughter and good times. In 1968 it was decided we would return to Sydney aboard The Galileo, leaving behind a growing interest in my father's work in Florence.

Upon returning to Sydney, James witnesses a transformed city, what he had once deemed mundane, was transforming into the culturally rich epicentre of Australian life. On his return to Australia, James found a new appreciation for the country's unforgiving yet beautiful landscapes. This appreciation for the country's natural majesty followed him into his later life, where he found refuge in depicting the land that enthralled him, particularly the bush around Wedderburn, NSW, where my mother had her studio.

James began teaching at the National Art School, University of New South Wales under Miss Lorna Nimmo and the University of Sydney with Dr Lloyd Rees. His paintings were shown in exhibitions at the Macquarie Galleries, Woollahra Gallery, Painters Gallery in Sydney, Toorak Art Gallery in Melbourne as well as other shows in conjunction with his wife Elisabeth Cummings. In 1990 James and Elisabeth separated, though they remained good friends for the rest of his long life.

It was in his later years that my father and Josephine Maxwell began a relationship. Though they had known each other for many years, meeting through their mutual friend Martyn Corbett in the 1950’s, their relationship started in 2001. The pair shared a love for travel, good times with friends and “The Glebe” where they lived. Although the relationship formally ended in 2016, their separation did nothing to inhibit a strong friendship that remained until my father's passing in 2019.

In selecting these works with my mother and daughter, Ivry Barker (also pursuing a life in arts) we have tried to capture the range of skill and interest in both landscape, Australian and Italian, as well as James’ love for beautiful things.

James Barker (b1931) Northwood - a bushy suburb of Sydney near the Lane Cove National Park.

Other students at East Sydney in the same period included Karen Oom ; Cam Sparks; Ursula Latham ( Laverty) and Elisabeth Cummings. Elisabeth was to join James in Florence some years later, where they were married and spent the ensuing years painting teaching and travelling throughout Europe.

During the period in Florence James and Elizabeth had a constant stream of visiting travellers from Australia many of them fellow art students from East Sydney. In late 1968 Elisabeth and James returned to Australia with their young son Damian, born in Florence just shortly prior to the historic and catastrophic floods of 1966.

Back in Australia, Elisabeth and James painted in and around Coal and Candle Creek, then after the commencement of the building of the “Mud Hut” at Wedderburn, Barker was very much inspired by the surrounding bush and the George’s river which was not far away. Barker painted the bush around Church Point and latterly around the southern banks of the Hawkesbury River around Brooklyn. 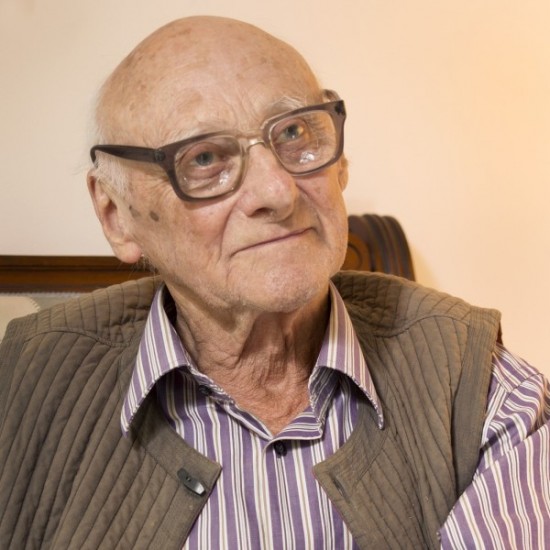 Born Sydney 1931 and educated at Knox Grammar School Wahroonga.  He studied at East Sydney Technical College graduating in 1955. From 1957 - 68 James lived in Florence, Italy and travelled extensively in Europe.  He studied at the Accedemia dei Belle Arti in Florence and with Kokoschka in Salzburg.  He taught Higher Mathematics at Miss Barry's American School and English as a foreign language for the British Institute of Florrence and the Universita Popolare. In 1966 he opened his own studio in Florence for the instruction of painting and drawing.

He returned to Australia in 1968 and taught at the National Art School, University of New South Wales under Miss Lorna Nimmo and the University of Sydney with Dr Lloyd Rees.  Tutored for Adult Education and the Arts Council of Australia.

He held a number of exhibitions at the Macquarie Galleries, Woollahra Gallery, Painters Gallery - Sydney, Toorak Art Gallery – Melbourne as well as other shows in conjunction with his then wife Elisabeth Cummings at Orange, Berrima, Canberra and at the Blaxland Gallery – Sydney. 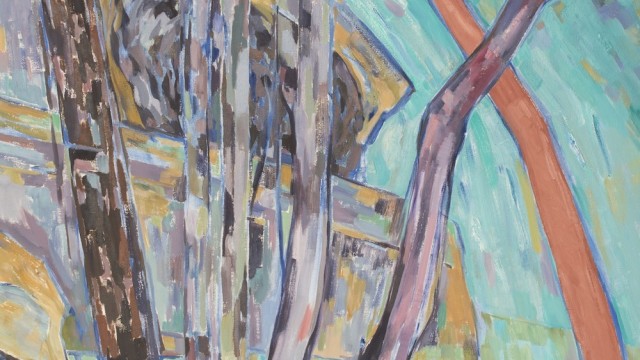 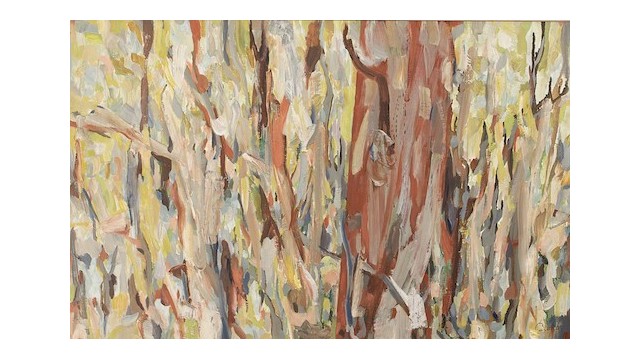